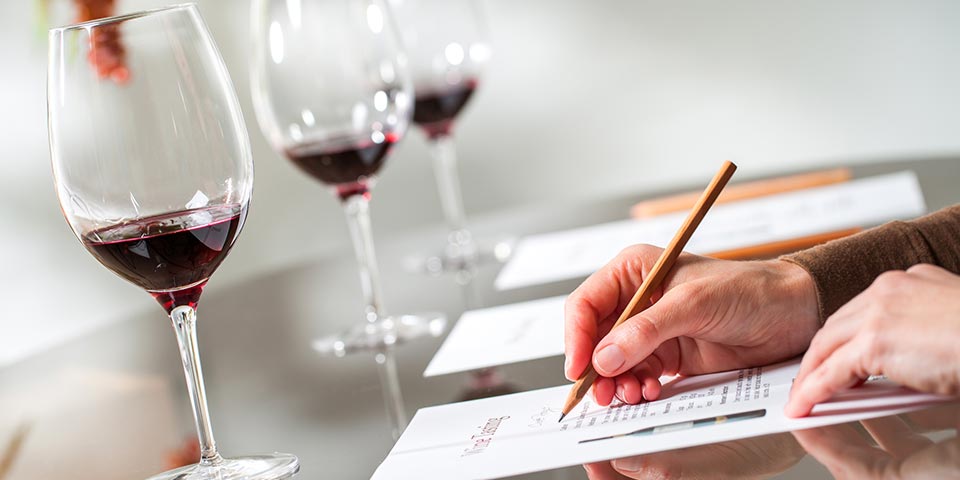 The key objective of this workgroup is to favour networking between partners aimed at the preparation of joint projects.

The group is actively involved in oenology, engineering innovations and processes challenges with several approaches.

The main subjects of interest are:

Possible OENOVITI projects in the fields of grapes breeding:

In contrast to most other crops, grapevine varieties are rather old; riesling more than 500 years, Pinot noir possibly 2000 years and some of the older table grape varieties, e.g. Sultana or Afus Ali even more than that. Many of these varieties are natural hybrids of others. The knowledge of varieties' ancestry could help to unravel their parentage and geographic origin and understand the development and spread of viticulture in history. A lot of work in this field has already been conducted by a number of work groups using microsatellites. This work is not fully completed, plus a link with archeology is still missing. The idea of the project is to complete picture of varieties' parentage and geographic origin.

The three major pests and diseases in viticulture are phylloxera, downy and powdery mildew. All three originate from North America and were introduced into Europe in the middle of the 19th century, where in particular phylloxera devastated huge areas. The phylloxera problem could be overcome by the development and use of American rootstocks, while downy and powdery mildew are controlled by fungicides. Resistance breeding has the potential to provide a biologic alternative to fungicide application, but is time consuming. This is the reason that only now the first mildew tolerant varieties with high wine quality enter the market. If resistance is based on one mechanism only, there is always the threat of resistant pathogens developing. A possible solution is the combination of several resistance mechanisms in a variety, called pyramidising. This requires the understanding of the various resistance mechanisms and the use of molecular markers to identify their presence in a possible parent and hybrid. The aim of the project is to investigate resistance mechanisms for phylloxera, downy and powdery mildew and develop of markers for marker assisted selection in resistance breeding of grapevines to enable the development of multi-resistant rootstocks and scions.

Contemporary human activities are mainly responsible for the increase in greenhouse gases in the atmosphere, contributing to a significant shift in the earth’s global climate. With rising temperatures and shifting rainfall patterns and extreme weather events, the wine sector is increasingly exposed to many agronomy and wider socio-economic impacts, requiring urgent adaptation and mitigation response strategies.

The goal of this workgroup  is to prepare international network projects, seeking to collect and transfer knowledge and innovation among stakeholders, policy makers and scientists. The group is actively involved in addressing the issues of reducing impacts and building resilience, while also pursuing to reduce environmental impacts and limit greenhouse gas emissions.

The main subjects of work are:

The main objective of this working group is to create a network proposing a global industrial transfer to the wine business companies in the world. Today, already 15 members from 9 countries are part of this group.

For industrial topics, it appears necessary to combine the labor of two or more different labs or institutes.

The brief description of our activities includes:

2) development of several case studies around the world (with the Oenoviti network partners – in Italy, Portugal, Greece, Chili, Argentina, Spain, etc.) with specific issues depending on the country and the wine/agricultural region;

3) writing of a collective book on the theme of wine and spirits tourism around the world, highlighting territorial, geographical and cultural

The aim is this work group is to discuss and develop research collaborations around the relation between wine and health questions.

The main objectives of this workgroup are:

Exchange of knowledge and good practices in cooperation, mobility, internationalization, strategic monitoring of opportunities for funding, comparison of procedures and administrative rules for degree delivery, mobility and accreditation, comparison of organization of international departments and their missions to help researchers and students, main obstacles of the cooperation...

The digitalization process underway in agriculture sector and the evolution of new technologies such as the internet of things, artificial intelligence, robotics and big data, among others, will help the Viticulture and Oenology sector to save labor and improve the management processes and practices. It will also improve the resource use efficiency and the accuracy of the decision-making, therefore, promoting the sustainability of the grape and wine production.

The main objectives of the work group is to promote collaboration among Oenoviti members by exchange knowledge, experience and ideas in order to foster the development of joint actions (e.g. training and research projects, organization of events), in the areas of Digitalization and Robotization of the Viticulture and Oenology production chain.

This group is dedicated to the career of young researchers, meaning people being at their last year of PhD until 5 years after graduation.

This group aims help young researchers to grow in confidence, capacity and creativity and discover the vine and wine enterprise world.

For that, we propose to work in different axis:

If you have any idea to propose and/or you want to join us, please contact us: This email address is being protected from spambots. You need JavaScript enabled to view it.